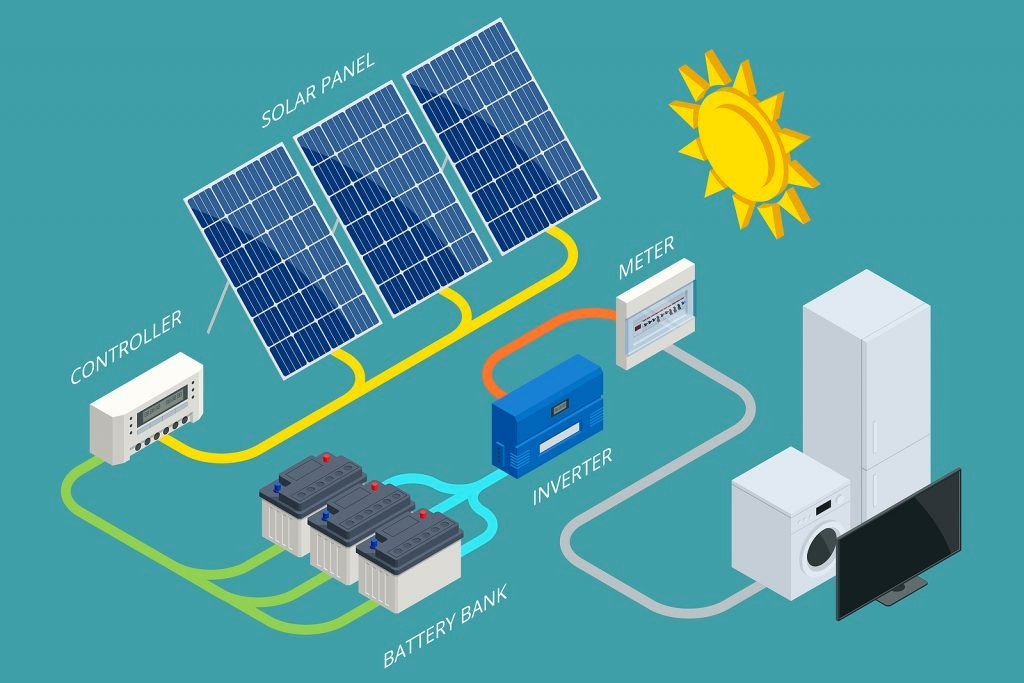 The primary purpose of a solar inverter is to convert direct current, DC, into alternating current, AC. The conversion is crucial in solar systems considering solar panels generate DC while the consumers – households, appliances, and businesses utilize the energy in AC form. In the absence of these inverters, you can only produce and store energy (through a solar battery), but your consumers can’t utilize the power. So, the solar inverter serves as the solar system’s ‘gateway.’

A solar inverter is an indispensable part of the solar system. It is vital to study how the whole solar system works to understand its importance. The process involves collecting solar energy from the sun by the solar panels. The sun rays are captured by the solar photovoltaic PV system, causing the movement within the solar panel cells, which creates the DC energy. The circuits within the cells collect the energy from the sun and convert it into electrical power. The individual panels keep collecting the power throughout the day, as long as the weather allows, while producing DC and combining it. The energy is then transmitted to the solar inverter.

How Do Solar Inverters Work?

Solar inverters receive power in DC form and convert it to AC which they send to the fusebox. When the switchboard receives the AC, it is ready for supply and use by the consumers. In the event of excess power from the fusebox, the energy can either be stored in the battery storage systems or sent back to the grid, depending on the user’s energy requirements and system setup.

Where are solar inverters installed?

Solar panels are strategically mounted on rooftops to trap as much sunlight as possible. However, solar inverters are different. They are placed on walls outside the building, garage, or laundry room. The goal is to protect them from harsh weather conditions while ensuring close proximity to the power board. It would be great to have your inverter in the shade for optimal performance.

Like solar panels and other solar system components, solar inverters come in different types. The three major types are:

The battery backup solar inverters are designed to transition the energy from solar batteries by shifting the charge from the charger to the grid. You should note that some battery backup inverters supply alternating current. So, they must be equipped with anti-islanding protection, which comes in handy in the event of a power outage or interruption.

The standalone inverters are designed for typically isolated solar systems. They are an excellent choice for power systems that are off-grid and presumably fitted with batteries. These inverters draw their DC power from solar batteries to convert to AC energy. Besides, these inverters don’t interfere with the utility grid in any way, which eliminates the need for anti-islanding protection.

Solar inverters come in a wide range of sizes to meet individual consumers’ varying energy needs and requirements. The suitability of each inverter size depends on the solar panels used; for instance, a 5.0 kW solar power system requires a solar inverter of either the same size or larger capacity. At its most basic level, an inverter must be equipped with adequate capacity to accommodate the maximum amount of power the solar system can feasibly generate. Aesthetically, solar inverters have different appeals, appearances, and sizes. The smallest dimensions are about the size of a business suitcase, while the biggest ones are similar to large overseas travel bags.

Can Solar Inverters Allow You to See What Your Solar Is Doing?

Besides their crucial purpose in your solar panel system, some inverters also offer basic monitoring functionalities. However, these capabilities are limited. For instance, most of these inverters provide a display light that updates you on the unit’s status, whether it is on, off, or on standby mode. They can also indicate displays of the amount of energy – kilowatt-hours – produced over the last 24 hours and the amount of electricity produced overall (total). But you have to inspect the unit to access these information details physically. Moreover, it would also be great to invest in an intelligent energy management system, which helps provide remote monitoring while ensuring that you get the most out of the solar power system.

How Long Do Solar Inverters Last?

Solar panels have no moving parts and have the longest lifespan among all the solar power system components – up to 25 years. However, inverters are different. They are arguably the most vulnerable to damage that fails the entire system, requiring regular replacement every 5 to 10 years. Fortunately, the market offers a range of software to monitor your inverter for any underlying issues. Besides, you can also set reminders to check for replacements and necessary repairs before the warranty expires and the problems explode, affecting your operations.

“What is a solar inverter?” This is one of the most common questions people keep asking before they venture into the solar power business or install the energy in their homes. If you have been recently asking yourself this question, you have the answer above. This component is the middleman to utilizing solar power in your home safely and conveniently.

It is helpful to know different parts and systems when dealing with your solar business. If you really want to expand your business, better educate yourself first with parts such as solar inverters. That way, once you generate solar leads, there is no problem explaining and have an easier time to sell.